My sweet baby Phoebe was baptized on Saturday.  It was a glorious day.

She looked like a complete angel sent from Heaven.  I really think she knew exactly what was going on, because she didn’t try to take her bonnet off once (which is really rather serious since she never, ever leaves anything in her hair EVER). Not to mention the fact, that she was super giddy the ENTIRE day. She just couldn’t contain her excitement. 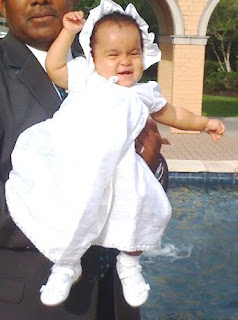 I was pretty giddy myself, which is odd, because usually at these events I’m super somber, and weepy, and spiritual, and holyish (as much as I can be).  But this time I was just sooooooo happy.  That’s it.  My entire extended family was there, and I didn’t shed one tear because it felt as if all was right in my world.  I just stayed in that moment of bliss, because I really liked it there.

I didn’t even strangle my husband when during the ceremony, he (The Baptist) says to me (The Catholic) at the Catholic Baptism, in the loudest whisper heard to man, “I think we are supposed to say ‘Blessed Be to You’ or something like that.”  I looked at him, smiled politely, and took my baby.

Then, the next thing I know (after the priest says whatever the priest is supposed to say) Warwick in a very loud ‘Come on everybody, say what I am saying voice’ says YELLS “Blebba Be Yas”.

Now to be fair to all sides of this story, I will just say that I am sure that Warwick does not believe he yelled in the middle of the most sacred ceremony the Catholic Church has. Maybe I am embellishing a bit.

On second thought, no I’m not.  I saw the people standing next to us, look at us crazy, he definitely yelled “Blebba Be Yas”.

Well, no harm done.  Even after his crazy yelling episode, little Feebs was still baptized, and all was well and good.

My kid, I was so proud of her.  While all the other children were wailing, she was just chatting it up to Mama and Dada.  No scaries in her belly.  She did so well.  And, if I’m not mistaken, I actually think she said “Tank You”.
Oh, oh, oh!  And the best part (well, maybe not the best part , the best part was when Phoebe was baptized, but this part is pretty good) was when the photographer (aka Poppee)  was having problems taking pictures and accidentally took a video instead. I’ve been too lazy to figure out the video feature on our camera, and now I know how incredibly easy it is.  So now, I can take video of Phoebe not crawling.  Yeah!!!!!!!
Oh and there is a third best part. There is a picture that was taken at the baptism in which, my sister says I look like a super model. And I think I’ll just take that compliment and run with it. Because, even though this is my child’s baptism, I love to make things all about me.

So there ends a perfect day with one baptized baby, one new video clip,  a super model picture, 20 hot dogs, 18 hamburgers, and 2 lemon meringue pies.  I don’t think life can get any better than that!

Nuthin’ says baptism to me like Lemon Meringue Pie.  I’m not sure why, but I think it has something to do with Easter, the color yellow, and the creamy perfection that is this heavenly tart.

This is the recipe that my maternal grandmother, Madere, used to make.  I never met her, she died before my time, but she lives in my heart and I know she is smiling down on us now.  We love you Madere.

*Note:  This is very important. This recipe calls for Sweetened Condensed Milk, not evaporated milk, those are two very different things, that are sold very close together in the grocery aisle.  One is thick and sweet (that is what you want) the other is runny and not so sweet. You do not want that.  The pie will not taste good nor will it solidify, so you will not have pie, if you do not purchase the correct product. Proceed with caution!

1 14 oz. can of SWEETENED CONDENSED MILK (see above)

1/2  cup of  lemon juice (don’t buy the kind that sits on the shelf in the juice isle. Either squeeze it yourself or you can buy fresh frozen lemon juice in the freezer section)

1. Preheat oven to 350 degrees.
2. In a medium bowl, combine sweetened condensed milk and lemon juice.  Whisking continuously until combined.
3. Add egg yolks, and continue to whisk until thoroughly blended. Pour into graham cracker crust.
4. Make meringue: In a seperate clean bowl (all tools used to make meringue must be completely clean or the meringue will not stiffen) beat egg whites with cream of tartar until soft peaks form. Slowly beat in the sugar in until the peaks are stiff.
5. Spread meringue over the filling.  Bake for 12 minutes or until meringue is golden brown.